With summer finally here, can the Bitcoin market finally start to heat up again?

Since hitting an all-time high of over $64,500 in mid-April, the original cryptocurrency has faced severe downward pressure in recent weeks, with bucketloads of FUD (fear, uncertainty, and doubt) forcing Bitcoin’s price down by almost 50%.

Many experts believe the tide may be turning, however. In this article, we’ll examine the current price situation, some factors that may affect Bitcoin’s price in the near future, and the forecasts of experts in order to provide readers with a Bitcoin price prediction for June 2021.

What Is The Current Price Of Bitcoin? 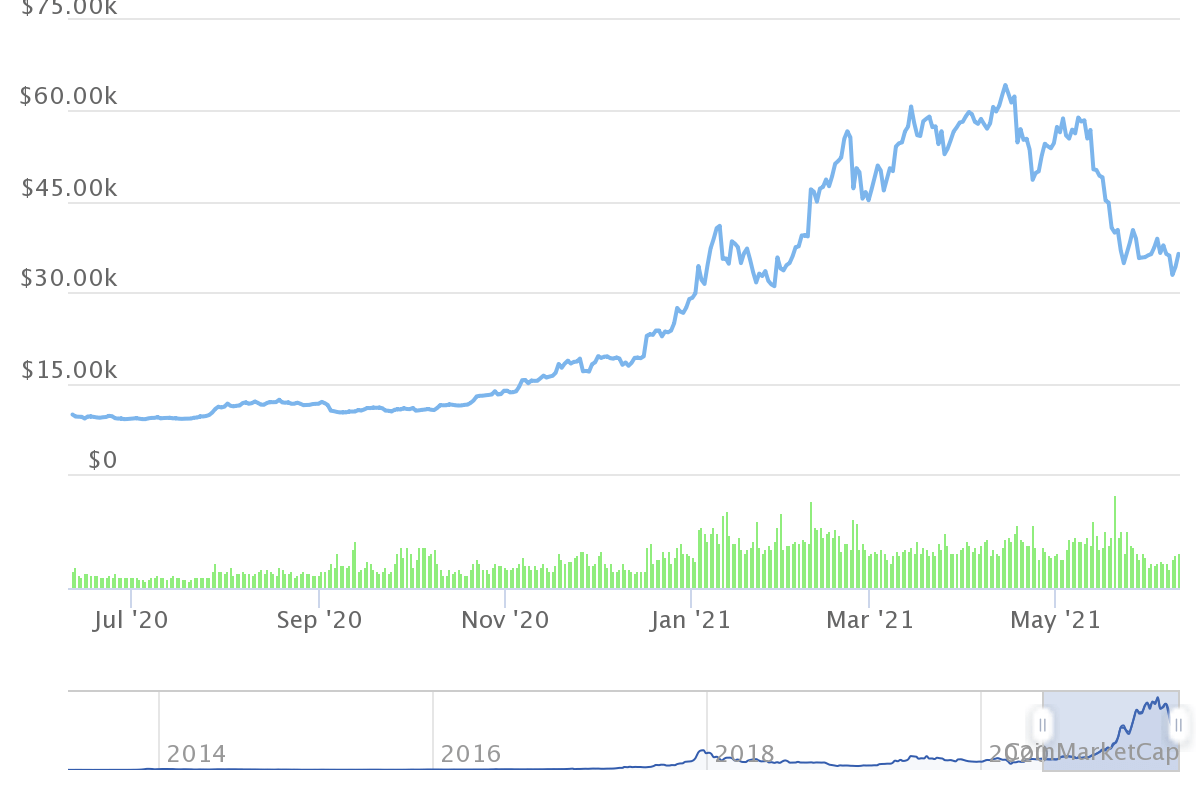 Bitcoin is currently priced at around $35,000. That is around half its all-time high price of $64.5k achieved in mid-April. Incredibly, the price is still almost 270% more than what it was just over a year ago. The crypto market bull run has seen increased institutional interest and renewed retail interest. For the first time, Bitcoin was able to attain a market cap of over $1 trillion, making it one of the fastest assets ever to achieve that goal. This was faster than Google, Amazon, Apple, and Microsoft.

The price would hit a snag after Tesla, which was partly responsible for 2021’s price gains after buying $1.5 billion of the asset, decided to reverse its decision to allow its vehicles to be bought using BTC, citing the use of fossil fuels in Bitcoin mining. This coincided with China’s crackdown on crypto, which saw the digital asset price drop to the $40,000 level.  Over the past two weeks, the price has ranged between $32,000 and $40,000, with BTC unable to break out of that range, but a bullish reversal now looms thanks to some positive fundamental changes. Below, we’ll explore a few reasons why the price is likely to break above the range.

What Events Might Move the Price Of Bitcoin In June?

This section will cover the factors that are likely to influence the price of Bitcoin in June.

The Resumption Of The Bull Market

The crypto market bull run may have taken a slight hiatus; however, this was expected sooner than later. It’s safe to say the market has rallied for seven months straight since the last quarter of last year. The current snag arguably isn’t anything to worry about, and many experts believe there is more to come as the price of BTC can go as high as $100,000 by the end of the year.

Analyst Plan B’s Stock-to-Flow (S2F) models remain intact despite the recent correction, and these project very exciting cycle tops. The standard S2F model predicts a $100k top, while the modified S2FX version allows for an eye-watering $288k. A resumption of the bull run should push the price of BTC back to familiar territory.

After the likes of Tesla got into Bitcoin, many institutional investors began to feel confident with cryptocurrencies. They are looking not to miss out on the gains that digital assets such as Bitcoin promise. One company that is quite involved with Bitcoin is MicroStrategy, Inc. The company owns over 97,000 BTC and has now borrowed $400 million to acquire more at what it sees as a bargain price.

According to Goldman Sachs analysts, FOMO has been a formidable force for institutional investors watching on the sidelines as the bolder ones profit off the crypto market. Therefore, sustained interest from such investors should push the price of BTC up. Industry insiders are also reporting interest from central banks, which could be enormous for the digital asset.

Nation-States Have Entered The Game

This week, in an historic move, the South American nation of El Salvador passed a law making Bitcoin legal tender. Despite the country not yet moving to purchase large quantities of BTC as a reserve asset, this development marks a huge development in Bitcoin’s ascent to the status of true global money. According to Vijay Boyapati’s essay on monetary theory, this could mark a key step in Bitcoin’s journey from a store of value to a medium of exchange, which makes a strong case for Bitcoin’s growing “money-ness”.

Other LatAm countries including Brazil, Mexico, and Paraguay, as well as the Polynesian country of Tonga, have now signalled interest in either making Bitcoin legal tender or purchasing large quantities of the asset for their reserves of sovereign wealth funds. This is extremely bullish news for Bitcoin, and may prove to be the fuel required to thrust the bull market back into action.

There are multiple potential price targets for June depending on the type of analysis employed, but all predictions point to the end of the current “microbear” market.

#Bitcoin loves the swing failure pattern. To the upside and downside, 5th waves often fail. Just when everyone gets giga-bear and leveraged short, price reverses pic.twitter.com/DtfGPcwcCZ

Twitter analyst @DatCryptoBoi, whose trading system yields profits of over 900%, believes that the Bitcoin correction is over, based on fractal analysis of previous price dips. Now that BTC has made a sharp recovery, he predicts that Bitcoin will enter an ascending channel, ending June in the region of $42-45k. This would represent an increase of around 20% from the current price range. 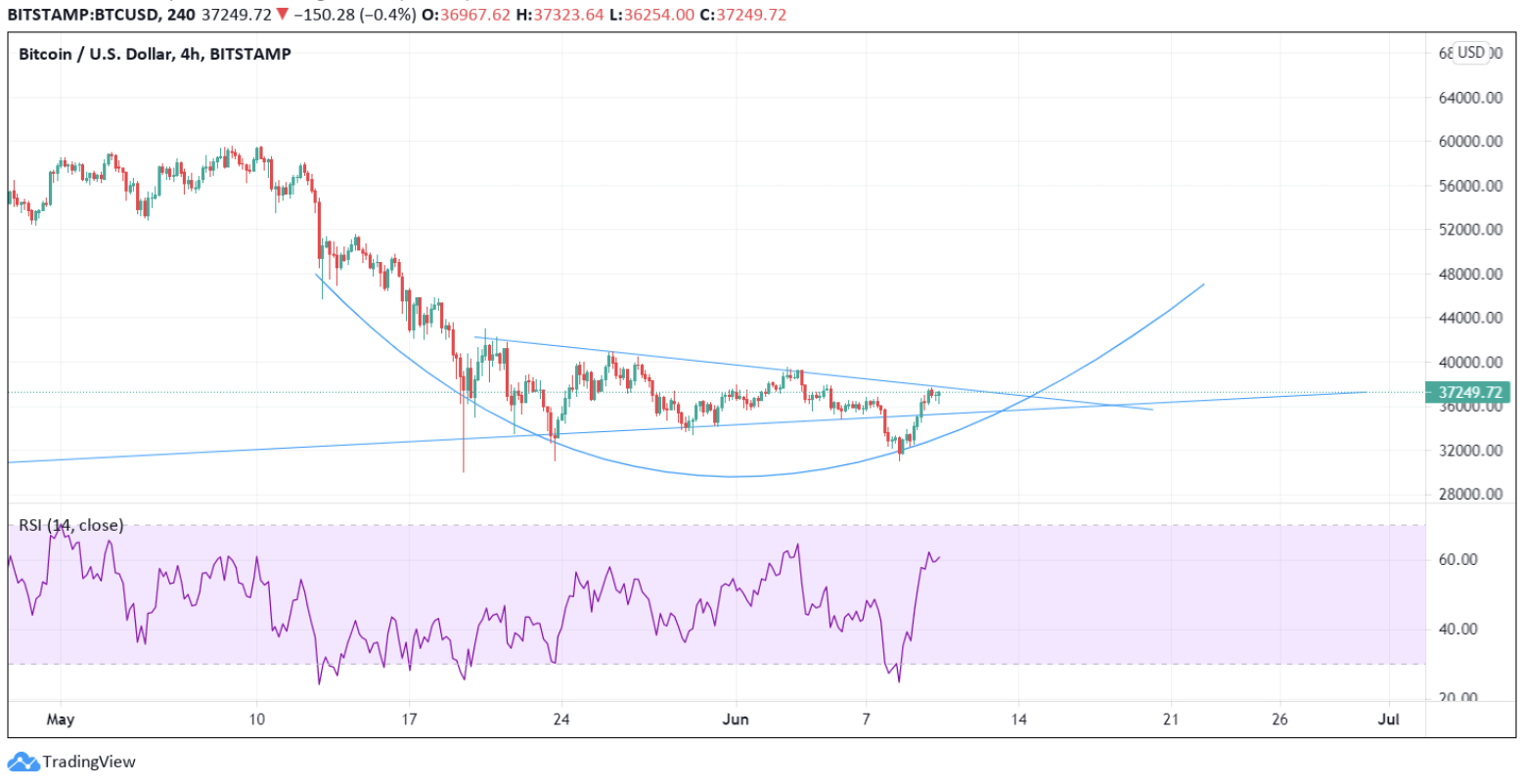 Bitcoin is also forming a “rounding bottom” pattern on its price chart. This pattern occurs as downward moves run out of momentum, and provides a strong upward springboard as the asset recovers in price. Bitcoin has also reclaimed its long-term trendline, and if the price can remain above $36k for the next few days, a full recovery is arguably in effect. If this trend continues, then the $52k resistance area is a natural price target for the end of the month.

To conclude, most signs point to a bullish June for Bitcoin. The technical picture is providing price targets ranging from $42-45k to $52k or higher. It must be noted, however, that price targets and models go out of the window when Bitcoin experiences large fundamental shifts.

In the same way that Elon Musk’s FUD precipitated May’s “bloodbath” and flipped market sentiment negative, El Salvador’s announcement has helped Bitcoin to reclaim a vital support level, and has potentially reinstated the reign of the bulls over the market. With further fundamental developments, a $5,000-10,000 daily gain is never out of the question.

Please note, the details provided above are entirely a personal opinion of the writer, derived from the relevant market data. None of these are meant to be taken as direct investment advice.

The post Bitcoin Price Prediction for June 2021 appeared first on The Home of Altcoins: All About Crypto, Bitcoin & Altcoins | Coinlist.me. 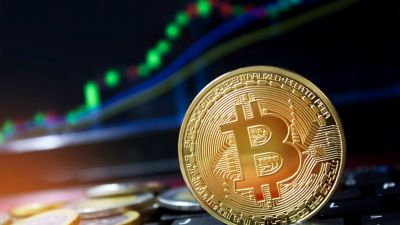 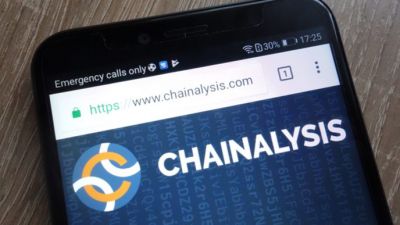 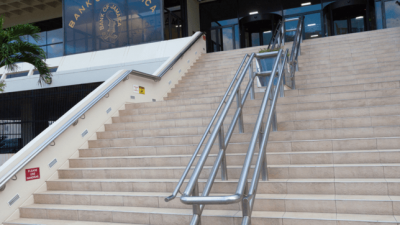